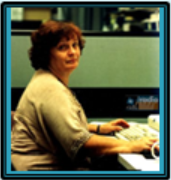 In the memory of Elica Rizmal

"HARD TIMES ARE CLOSING IN WITH MOMENTAL SPEED..." wrote to me at the end of his Internet message on Easter Friday, Vinko Rizmal, from Australia. What difficult times I was wondering, but everything remained somewhere in the air, undetermined. After that, on Easter Suturday, Elica Rizmal, his wife congratulated me for the holidays...and than there was no more Easter Sunday!
And Vinko's message came again:

"Aurelia Pia Rizmal - Elica was born on August 14, 1943 in Celje, but until her departure to Germany for two years and 1967 to Australia, she spent in Maribor ..." she was only seventeen and he was one year more ... " she met. She was certainly the most honest and positive creature I ever knew and what an honor and luck she was to live with ... who will now greet me every morning with a smile ...?

On Sunday, April 16, 2006, Elica Rizmal had her last broadcast in the Slovenian language at the most diverse radio station in the world, the State Broadcasting Service (SBS) in Melbourne, where 68 different languages are spoken. She also performed her last interview with Maribor humorist Vinko Šimek, who, together with Helena Blagna and other artists, would be leaving for Australia a few days ago. Then, about eleven o'clock, she drove towards the home, towards her farm Pohorje in Monbulco, near the city of Melbourne. Only twelve minutes were still needed ... but the fate turned tragicly - it knocked! not by her fault, and ... simply she was gone! She forever left her husband, Vinko, his daughter Zaliko, his son Kris, adopted Bojan, his relatives and friends, and above all the entire Australian community, which he needed so much. Slovenia was her world, she was convinced to hear, breathe, and understand. Slovenia - she loved immense love with her original homeland and visited her almost every year with her husband, because they built a beautiful home under Pohorje. She lived a full, active life. She always came to the world with full hope, and she saw something bright in every dark side.

And who exactly was Elica Rizmal? It will be very difficult to collect and record all of its activities; while the strongest are the memories of hours and days when we jointly squeezed plans for better Australian Slovenia as well as for the new state of Slovenia at the time of independence.

Elica Rizmal graduated from the Pedagogical Academy in Maribor during the Australian years, she was a journalist for 24 years and a 14-year editor - a reporter for the Slovenian broadcast on SBS in Melbourne, she was a repporteur and co-worker at many Slovenian radio stations around the world, a teacher of young radio personnel , a registered translator for Slovene and English, for several years she was active in the Slovenian Society of Planica - Melbourne, later a secretary at the Slovenian National Council (SNS) of the Australian Slovenian Conference (ASK) for the World Slovenian Congress (SSK), also responsible for contacts with media, and in this role she organized many meetings with Slovenian and Australian politicians, and with them also interviews from the time of the "Quartet" (with Janez Janša, in Australia with then Prime Minister Bob Hawk), she was a delegate of Australia at the founding of the SSK in Ljubljana in 1991. She organized cultural events for many years and received for this activity in 2000 on the Slovenian cultural day, the Australian Prešeren Prize  (from SNS Viktorija), actively participated in the Charity Organization in the Religious Center of St. Cyril and Methodius (within the SNS), attended the sick and needed help until the last moment, took part in the money gatherings for Slovenia, collected the koalas for the new The Pediatric Clinic in Ljubljana (within the framework of the Voice of Slovenia project), for three and a half years, with her husband Vink, prepared one-hour television shows for Community Channel 31 - Melbourne, she participated in the five-year family "Old Vine" project(Vinko brought the graft of Maribor's old vine to Australia and planted in Yarra Ranges in the suburbs of Melbourne) and a lot more could be written...

Last night before the funeral, Elica lay in the house of mourning in her home, surrounded by trees and flowers, which she loved so much and in the circle of her closest. At the open crucifix there was a guard, her family and her friends ... until the next morning, when the caravan of the three black limusins went on her last journey to the center of Melbourne, on a journey she had safely transported for thousands of times. Hundreds of friends, acquaintances, representatives of the Slovenian community from all over Australia, SBS Radia, Slovenian government representatives, children and youth attended a funeral ceremony in the church Sacred Heart in Kew. The funeral ceremony was led by Father Ciril Christmas and was carried out according to the idea of Elica's closest and her Australian neighbors, longtime friends, with the technical assistance of SBS Radio. Representatives of the Slovenian community in Australia, Slovenian government representatives and representatives of SBS Radio have spoken out of Elica.

Elica was cremated in Melbourne and rested at home until the day when part of her ashes will be spred in the Australian forest and after her beloved Pohorje, just as she and Vinco's husband took the part of the ashes of her lovely son Matjaž,  barely 9 years old, which was hit by a car in 1981. These losses were never overcome, and perhaps this was precisely the reason why she was so tired and hasty to live - to forget. The Australian Slovenian community and the Slovenian community in general lost Elica with a valuable personality that will remain irreplaceable...At the end of this record, the power of the words still unspoken is pulling out of me: my dear friend Elica, I feel like you are leaving and moving away, as if you will disappear, and you are returning again and again ... in my thoughts and my heart; I loved you and I will never forget you ...